skip to main | skip to sidebar

We attended our first 1st birthday party on the weekend and it was lovely -- chocolate crackles, cake, a jumping castle which was so big it filled every inch of the garden and dwarfed the house (more of a jumping Imperial Palace, really, but it was a hit, a Big hit).
I wasn't going to have a 1st birthday party for the boys, until, in a rare stroke of genius, I came up with this for a theme. It's going to be a bubble party -- a bubble machine for the boys, aerobars for the big kids and I'll be mainlining champagne. Heck, I'm almost thinking we might stick with the theme but ditch the children -- just get all the other twin parents over instead. Here's to toil and trouble, delicious boisterous toil and trouble.
Posted by Twobytwo at 11:41 PM No comments:

Three people have asked me in the last week whether I'm knocked up. OK, so sure I have been wearing my maternity gear a little longer than J.Lo, but the boys are still in their PJs and it's 3pm. For the avoidance of doubt, the "new tummy" referred to in an earlier blog is my post-twin pouch. The "maternity knickers" a post-Caesar essential recommended by the physio.

When it comes to me and pregnancy, it's like the second world war. Never Again. NEVER EVER AGAIN. No Bosnian or Rwandan carve-outs, here. Been there, done that and I can attest that it's the greatest propaganda ever propagated. That and the bit about children being necessary to complete one.

There was no glow about me whatsoever during my pregnancy. I vomited for 6 months, had 2 weeks respite and then started fainting before I got so vast that I just lolled on the bed scratching at my excema, panting from the exertion. My partner called me The Dugong (for those not in the know, the dugong -- also called the sea cow -- is the Joan Rivers of the Dolphin family). My father said to my mother "You really glowed during your first pregnancy. Kim, however, is not". When your own father thinks you look like a dog, things have to be dire.

Nope, as far as I'm concerned, twins have dealt with any maternal yearning in this household; I saw a newborn baby the other day and actually shuddered. Apart from the lady with the twins, the triplets and the mini bus, how often do you see parents of twins who went back for more? Very very rarely, is the answer.

In fact, twins could be the solution to so many of the world's problems. The UN wants to stem the population boom but appease the Catholic Church? Roll twins out to developing countries! Good God. You mean we could get that? Teenage pregnancy? Nothing to do with morality, my daughter, spend a day with us. Premature ejaculation? One word to keep you hanging on son, Multiple Birth.

And that's our sons: poster boys for abstinence.
Posted by Twobytwo at 5:23 PM No comments:

It occurred to me yesterday that having twins requires a split personality. One needs to be rigidly organised in order to go anywhere or do anything and cope with the shere logistics of 18 bottles, 3 loads of washing, 4 changes of linen, 10 changes of clothes and 20 nappies per day. My partner used to say there was more planning involved in attending lunch at my mother's than there was in the invasion of Bagdhad. Okay, bad example, but you get my drift. However, one also needs to be spontaneous enough to be able to abandon said plans on 20 seconds' notice because everything's going to shit.
Come to think of it, George W. Bush has twins. Perhaps if he'd left Baghdad to Laura we might have had a very different result...
Posted by Twobytwo at 6:18 PM No comments:

Is this happening in your neighbourhood?

I heard a mother moaning the other day that she finds it really difficult to get her baby and the shopping inside and that, like most people, she'd rather carry the baby and ten bags than do two trips. I'm glad she hasn't spied me packing or unpacking the car because while it used to be easier (if heavy) as I waddled with two capsules, it now goes something like this...
Leave Twin 2 in the playpen with an interesting toy while I grab the nappy bag and Twin 1. Put down the nappy bag and unsnib the front door so I don't accidently lock Twin 2 inside and have to break a heritage window with a wheel of the wheelie bin (learnt the hard way). Double check the front door and juggle Twin 1 on my hip (who is ringing the doorbell) while I try to find the car key. Locate the car key and run Twin 1 out to the car listening to Twin 2 shriek as he realises he's been abandoned. Buckle in Twin 1 and bury him under a pyramid of toys. Turn on the car, undo the window a few inches. Turn off the car, lock the car, run inside to collect Twin 2. Listen to Twin 1 shriek as he also realises he's been abandoned. Tuck the car key into my bra (my mum's tip which is spastic but I'm too tired to think of another regular place I won't lose it -- flawless as long as I remember to put on underwear). Collect shoes, socks, and blankets that Twin 1 has strewn on the way to the car. Do this slowly as I am in the geographic mid-point between Twin 1 and Twin 2and can hear neither. Manage to convince myself that this is getting easier and the boys are adjusting to the system. Take another step and hear Twin 2 bellowing. Start to jog as he sounds just like somebody is extracting limbs from his body one by one. Trip over the nappy bag I left at the front door. Collect Twin 2 who, it transpires, has all limbs intact but won't look at me he's so angry. Worry about the emotional damage Twin 2 is suffering and whether, as a result of this neglect, he will drop out of school and end up an angry junkie in gaol. Wipe Twin 2's face, pick up the handbag and nappy bag and limp down the hall with Twin 2 still sniffling but tearing out the pages from Twin 1's favourite book "A Guide to Roast Pork and Ham this Christmas". Hear Twin 1 bellowing from the car. Confirm that neighbours have now gathered around the car and are assessing the temperature (17'C) and whether they should break into the car for fear Twin 1 could be suffering from hypothermia/heat exhaustion. Twin 1 cries louder to assure them that indeed he is suffering from both and that they really should consider calling the Department. If they could understand baby sign language they would realise that he's even providing the name and number of his preferred case officer. Fortunately, they can't.
Grope inside my bra for the car key. Miss it. Feel it slide down the front of my dress until it is jammed between my new tummy and the maternity knickers. Wriggle while trying to hold onto Twin 2 (hamming up his neglected face for the crowd). Shimmy until the key slips out from under my dress, and slides under the car. Holding Twin 2, grope around under the car until I find the key. Scoop moss out of Twin 2's mouth. Stand up and then break up the crowd (literally) when I bend to open the car door and my handbag (which Qantas made me store in the hold on our last flight) and the nappy bag (which could, if pushed, transport a tiger), swing down off my shoulder, batting a nosy neighbour into the gutter. Struggle with Twin 2 who reminds me and the neighbours how much he loathes the car seat by standing in it and refusing to bend. Snap him in half, possibly breaking both his legs. He certainly yells as if I have. Shut the car doors, jump in, wave merrily and try to act really together as I drive off, pages from "A Guide to Roast Pork and Ham this Christmas" fluttering in my wake. Look in the baby mirror and realise Twin 2 is wearing neither shoes nor socks. Return home to collect them from the pavement and find they are now sitting on the fence, smugly placed by the conferee of whispering neighbours who have also gathered up "A Guide to Roast Pork and Ham this Christmas" and put it in the recycle bin. Make a joke about it all being a bit like a crazy Egg and Spoon race. No one laughs.
I wonder how that woman with the cricket team and the minibus does it? My tip is that the minibus has never had to have its 5,000km service as she never leaves home. And that, dear Follower, is perhaps the only solution.
Posted by Twobytwo at 2:37 AM No comments: 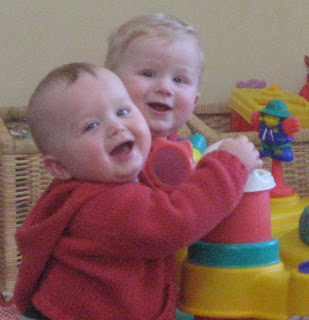 Posted by Twobytwo at 2:34 AM No comments:

Every twin mother is that person at mothers' group who makes all the other mothers feel great about their lot. Of course the twin mother can't take the singleton mother's complaints seriously (you're whinging because you've got one child with mild reflux when the parent to child ratio is 6: 1 allowing for anxious grandparents? Come on. Give me twins -- one with gastro and the other with croup but developing gastro, a partner with manflu, two step children with various demands and several key household appliances with various demands and I'll give you feeling sorry for yourself. Stick your kid with mild reflux in a baby bjorn and do a shift every 6 hours...). You get the picture. However, it occurred to me today that I am to mothers' group what a fat friend is to her friendship group. I'm the one who makes every other woman feel trim and terrific on the beach. And not just because of the size of my thighs.
Today, however, I found my own fat lady -- the woman to make my chaos look ordered, the woman with a brood to silence my screaming children, the mother of all multiple births. I'm talking a woman who has two sets of twin boys under 5 and infant triplets. Natural. No emulating Angelina Jolie with this poor damn thing.
So the next time you catch me complaining, remind me of this poor sod, her cricket team and her mini bus and I'll walk tall and trim with a smile on my face: nothing but love for my boys.
Posted by Twobytwo at 2:10 AM No comments:

We broke the brute

Finally. But the little brute broke us.
One all. Too shattered to type.
Posted by Twobytwo at 2:13 AM No comments:

Twobytwo
Last year I was a children's writer and lawyer who worked hard and wore shoes with towering heels. Now I am a mother of twin boys who stews pears and does 3 loads of washing a day. My shoes are orthopedics.